Gold, a Key Contributor to the Economy of Quebec and the Daily Lives of Quebecers 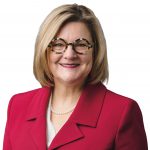 Gold, one of the many commodities mined in Quebec, is a metal that has been prized by humanity for thousands of years. Although one might think it is mainly intended for jewellery or a safe-haven currency since gold tends to retain its value or even increase in times of market turbulence, its many properties, such as: malleability, resistance to corrosion and high electrical/thermal conductivity, make it a sought-after material in several industrial sectors.